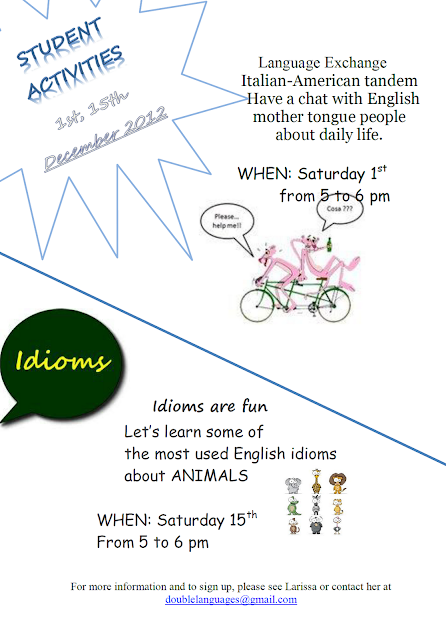 Last Saturday we had our first meeting with the new students!

The Language Exchange is an amazing activity you can practice your speaking skills with both your classmates and native American people.

In the first meeting we played HUMAN BINGO 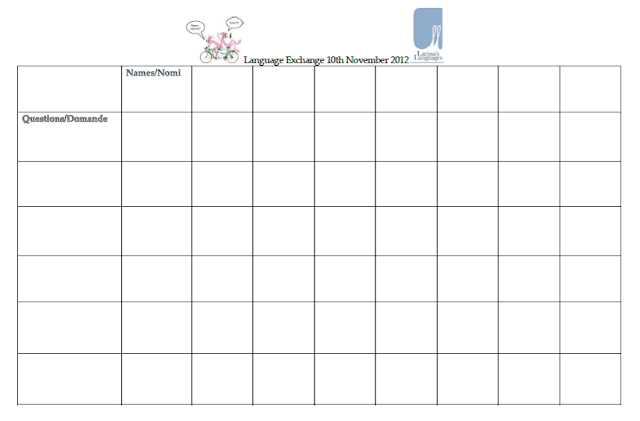 Students wrote the names of the people who were in class, then the questions they wanted to ask. Later they started their interviews. When they had all their charts filled in we talked about each student. Everyone said something about the others, of course the information was given both in Italian (by the Americans) and in English (by the Italians).

Our next meeting will be on December 1st. If you want to take part you have to enrol at LARISSA'S LANGUAGES (STUDIO DI CONSULENZA LINGUISTICA).
I remind my students on Saturday 17th there will be the MOVIE AFTERNOON, please confirm your presence ;-)
Pubblicato da Larissa's Languages alle 08:22 Nessun commento: 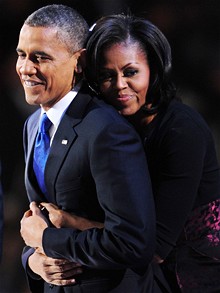 is the collection of the key moments of the speech delivered by the President Obama after his election.

This will help you to improve your listening skill. Plus, below the video you can find the tapescript (so if you have troubles to understand everything you can also read)

If you have any question please email me doublelanguages@gmail.com
Pubblicato da Larissa's Languages alle 12:39 Nessun commento: 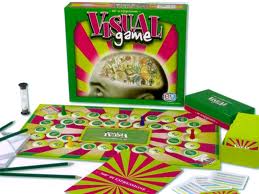 If you are an English teacher contact me for further information about the rules!

What is Bonfire Night or Guy Fawkes' Day?
The year was 1605 and some English Catholics were angry because the King of England, James the first, was treating them badly. In November 1605 a group of men made a plan to blow up the Houses of Parliament (the government buildings) in London. An enormous explosion was planned for November 5th. This was the day that the King was due to open parliament. The plan is known as the ‘Gunpowder Plot’ and the leader of the group was called Guy Fawkes. The men put 36 barrels of gunpowder (a type of explosive) in the Houses of Parliament and they waited for the King to arrive. The group decided that Guy Fawkes should light the gunpowder and cause the explosion. Did they succeed? No, they didn’t. The police found the gunpowder before it exploded and they caught all the men involved in the plot. The men were tortured and killed. To celebrate his survival, King James ordered the people of England to have a bonfire on the night of November 5th.

What do they do today to celebrate this day?
On November 5th people remember the plot to blow up the Houses of Parliament by celebrating ‘Bonfire Night’. All over Britain there are firework displays and bonfires with models of Guy Fawkes, which are burned on the fire. The Guy is made of old clothes and the clothes are filled with newspaper. The Guy is a reminder of Guy Fawkes. The fireworks are a reminder of the gunpowder that Guy Fawkes hid in the cellar of Parliament. Some people have a small bonfire in their garden on November 5th. In main towns and cities there are big bonfires and firework displays.

It is funny to see how the economic crisis is displayed in this comics published on the Guardian website. 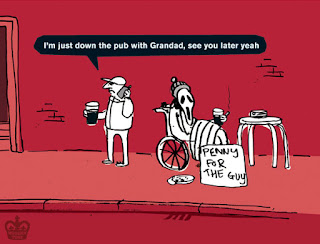 Moreover, the biggest bonfire is in Kent.Every year, the Edenbridge Bonfire Society chooses a different celebrity "villain" to take the place of Guy Fawkes, and this year it was the turn of Armstrong, who was recently stripped of his seven Tour de France titles for doping offences.
http://www.telegraph.co.uk/news/newsvideo/weirdnewsvideo/9654214/Bonfire-Night-Lance-Armstrong-effigy-burns-at-Edenbridge-fireworks-display.html

If you want more news about Bonfire night events and food visit
http://www.bonfirenight.net/
and if you want to watch a nice video about Guy Fawkes' story click
http://www.youtube.com/watch?v=q1DC2BAsXb4