SUPER HEROES: a good input to teach CAN (abilities)

It is summer students are fed up with studying so to teach them CAN (abilities) I decided to use SUPER HEROES. I'd like to share my lesson plan with you


1) I started with this picture and a poll: WHICH IS YOUR FAVOURITE SUPERHERO? 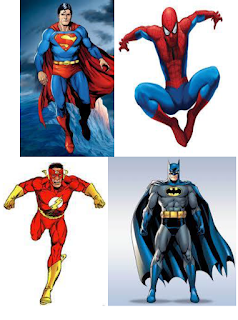 2) After the poll I showed them the trailer of SUPERMAN MAN OF STEEL to get them involved in the topic of super powers.

3) TRUE OR FALSE?
After watching the video students worked in pairs in order to say whether the utterances on the post-it (on the wall of the classroom) were true or false.
Their level is A1 so the utterances were easy.
Here some examples:

- SUPERMAN IS ARRESTED BY THE POLICE.
- WHEN THE SPACESHIP LANDS NEAR THE HOUSE THE WOMAN IS HAPPY.
- SUPERMAN KISSES A GIRL

5) Students were supposed to fill the first gap with the name of a SUPER HERO. I left a second gap if the students made a mistake. For example, they wrote BATMAN CAN ___ FLY. I didn't want to tell them they were wrong so I invited them to ask directly Batman whether he could fly.
STUDENT: BATMAN, CAN YOU FLY?
ME: NO, I CAN'T
So we added NOT to CAN. In this way students don't feel like they are wrong. Plus they learn NEGATIVE, SHORT FORMS AND QUESTIONS.

6) Then I asked students to draw their own SUPER HERO and write what they were their super powers.

8) At the end we put all the new super heros on the wall of the classroom.

I hope you can enjoy it!

Yesterday I went to the Cambridge Book Fair in Rome and it was a great experience. Not only was there a huge amount of books there were also highly-qualified, dedicated professionals to give seminars. 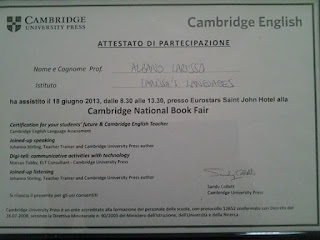 I really enjoyed the Joined-up speaking and listening by Johanna Stirling. She focused on fluency by making us listen to two conversations. The first conversation looked like one students can have whereas the second one was a typical  conversation between native people. Then she showed us some activities from the new edition of Face2Face in order to enhance students' fluency when they have a conversation, such as showing interest in what other people are saying. Johanna Stirling also stressed the importance of teaching pronunciation not only to improve students' speaking fluency but also their listening fluency.
The seminar by Marcus Tubby dealt about the use of technology in communicative activities. I had never seen the websites he showed us before and I am going to use them both in class and homework activities in my summer courses.
I was really impressed and I'd like to thank Cambridge English for giving me this fantastic opportunity!

Tomorrow there will be free trial classes to introduce the new ENGLISH SUMMER COURSES.

There will be exactly four classes:

9.00-10.00 ADULTS A1-A2
The aim of this class is teaching students how to give personal information and talk about basic daily activities. How? We'll use pictures, videos, drills and roleplay. 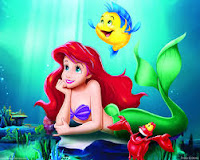 11.00-12.00 PLAY ENGLISH
This course is aimed to children from 6 to 10 years old. Tomorrow we are going to play in English: we'll sing, watch videos and dance with Disney's characters.

17.00-18.00 YOUNG LEARNERS (11-16 YEARS OLD)
Who is your favourite Superhero? We are going to learn some language (the modal verb CAN) by means of your favourite comics characters. 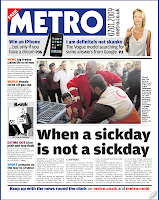 This course is perfect for those people who have already studied English in the past but want to improve it. Students will use their four skills (reading, writing, listening and speaking) starting from a newspaper article.

COMIC STRIPS TO WARM UP

Almost everyday I read METRO (a free paper)  in PDF format. I have found its comic strips so funny I started using them in order to introduce the topic of the lessons in some of my classes.

I used this one for a pre-intermediate level. The purpose of the class was:
VOCABULARY: food (fruit & vegetables)
GRAMMAR: countable & uncountable nouns

In this comic strip you can find two kinds of vegetables: BROCCOLI and SPROUTS. Broccoli is an uncountable noun and sprouts is countable. Students easily understand they are going to talk about food thanks to the words sandwich and eat.

I used this comic strip for an intermediate level. Students were studying how to write a cv, how to behave during their job interview and how to keep their job.

Initially I showed them just the first picture, asking them what the girl was doing and then whether it had ever happened to them to oversleep and get to work late. Then we had a look at the lines. Also in this case there are two key words: EMPLOYER and EMPLOYEE.

I think you can use comic strips with all levels and as the IMAGE CONFERENCE suggested, we need to stimulate our imagination by means of pictures.

LESSON PLAN: What impact could a drink have on your night out?

Yesterday I attended a webinar with the teacher trainer Chris Graham about involving the four linguistic skills during the English class. Plus "classes must be personalized" he said. This morning I watched the latest drink-driving campaign advert by the British Government and I planned this lesson. I hope you will enjoy it!

1) Show your students this picture. 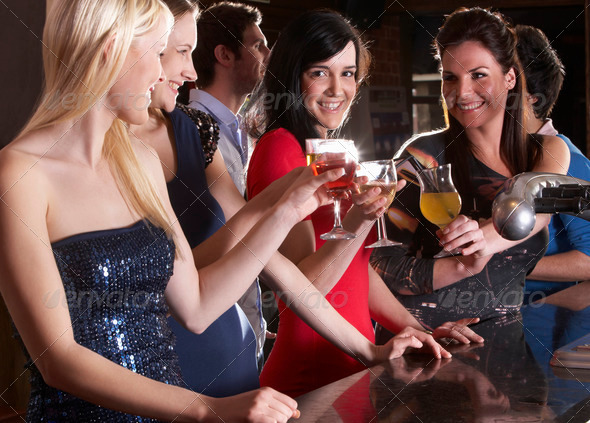 2) Ask them what they can see.
Then ask them to work in pairs and speak about how they usually spend their nights out. (Give them about 3minutes)

3) Make your students listen to the video. Only listen!

4) Ask them what happened. Then show the video but the final message.

5) Ask them the following questions:
What do the men look like?
What is their feeling after the crash?
What would be your reaction in their place?

6) Now show them the final message and explain this is an advert about the anti-drink driving campaign in the UK. (If you want to know more about the topic visit http://think.direct.gov.uk/drink-driving.html)*
WHAT IMPACT COULD A DRINK HAVE ON YOUR NIGHT OUT?

7) Divide the class in small groups and ask them to talk about the consequences of drink-driving. (Give them 5 minutes) Help the students with their vocabulary and grammar.

8) Now mix up the students so they can share with the others the ideas they have come up with in their groups.

9) Ask your students to write a short message to prevent people from driving after drinking alcohol.

*You can focus on the language used to give advice.

Most of my students who are about to take TERZA MEDIA exams think READING COMPREHENSION is the easiest type of exam but when they take it they make a lot of mistakes.
Let's see some tips that will help them do it right.

1. SKIMMING AND SCANNING
- The first time you read try to get the main meaning, the gist (SKIMMING).
- Then read the questions.
- Read again the text, this time more carefully, and focus on each paragraph (SCANNING).
- Now underline the parts you think are connected to the questions. 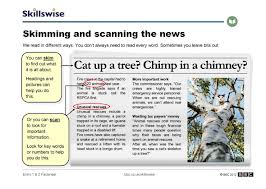 A. GRAMMAR and SYNTAXIS
Use the SVOMPT order.

B. VOCABULARY
I am sure there are words you don't know but you can use your dictionary. Sometimes using the bilingual dictionary can make things more difficult. So use logic.
For example you find the word MAILBOX. This is a compound word so divide it in two parts MAIL and BOX. Of course you know their individual meaning(mail=letter, box=container), put them together and you will have the meaning of MAILBOX=container of letters= CASSETTA POSTALE.

Learn it! Do it!
HARRY POTTER - THE WORLD'S BEST SELLING BOOKS
I hope these tips will be useful! Let me know about your exams!
Pubblicato da Larissa's Languages alle 08:31 Nessun commento:

Hi there!
Most of you have stopped your English classes for the summer break but you are afraid of forgetting what you have learnt so far. Don't worry!
I chose 6 free websites that can be used by all type of students (from elementary to advanced). If you want to "keep your English fit" during the summer break, have  a look at this post! 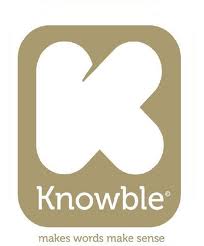 KNOWBLE (you must sign up)
Improve your English reading comprehension and vocabulary. 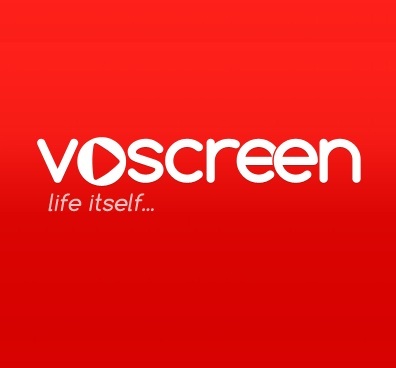 Improve your English listening comprehension by using films and your own language.

RECORD YOUR VOICE
Record your voice so you can compare your pronunciation and intonation to those of mother tongue people.

ENGLISH CENTRAL
Improve your English listening and speaking skills with movie scenes. First listen to the actors and then repeat. 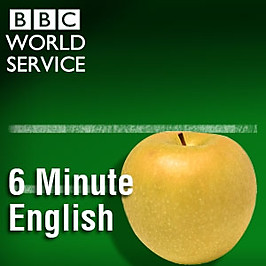 Click on 6 MINUTE ENGLISH and you can improve your English listening and reading skills as long  as your vocabulary. You can download both podcasts and scripts so you can listen and read wherever and whenever you want. 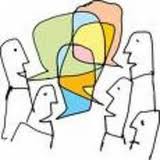 CONVERSATION EXCHANGE (you must sign up)
Improve your writing and speaking skills by finding a penfriend!
Pubblicato da Larissa's Languages alle 09:27 Nessun commento: