When was the last time you went red-faced? A lesson plan about embarrassing moments

I know coronavirus is what you expected I was going to talk about today, but no, I won't. There is a lot of going on already and I'm not a medicine expert.

I'd like to share with you a lesson plan I created some time ago for my DipTesol teaching practice. I used it with B2 adult learners but it can work with teenagers, too.
I was inspired by this article https://www.dailymail.co.uk/news/article-2200185/Top-50-embarrassing-moments-revealed.html and this viral video https://www.youtube.com/watch?v=p8nFR4sXkFE .

The objective of the lesson was to enable Ls to talk about an embarrassing moment in their/someone’s lives. 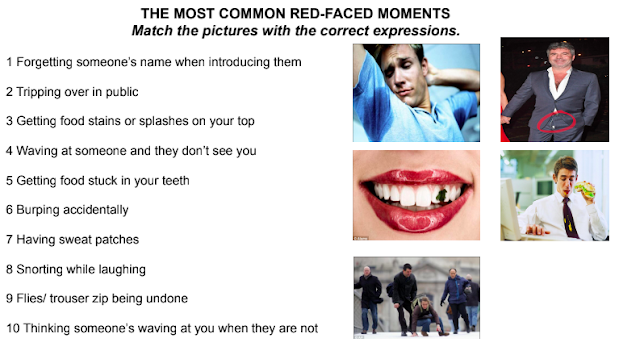 Let me know if this lesson plan has worked with your students too!

Ps. If you (student/teacher) want to take up Skype lessons with me, fill out this form! 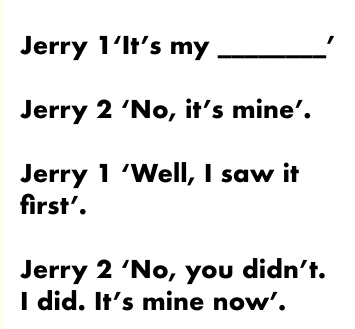 Yes, I know I'm a soppy romantic young lady, but I couldn't help sharing with you this video you can use in class over this week or even better on Valentine's Day. My students really enjoyed watching this short film and found it much easier to learn and memorise the target language I had decided to introduce with it.

Procedure:
1. Warm-up: Vision off
I told my students I was going to play a short film but they couldn't watch it. They had to listen and guess what was happening.
Typical answers were: Someone is watching TV. It's a TV advert. It's about love. Etc.

Another option would be starting off with telling students the beginning of the story.
Pamela lives on her own in an apartment in Paris. One evening while watching a movie she sees a commercial for a company who claim they can print her perfect guy, by logging on at printyourguy.com. Very excited, she runs to her computer to order one, but when it arrives, she realizes that the product wasn't exactly what she was expecting!
Ask students, 'Why didn't the product live up to her expectations?' (You might need to elicit the meaning of 'live up to')

After getting some feedback from the students I showed them these screenshots.
2. Target language: Adjectives to describe personality
Starting from the principle we never know how much our learners know, I asked all the class to tell me what their perfect guy/girl would be like by only using three words.
Of course, just a few people were confident enough to answer, (but I had already expected that).
I boarded the adjectives that came up, I elicited their meanings and drilled their pronunciation.
Then I gave each group a set of adjectives and they had to find their definitions on the post-it notes I had stuck on the walls before the lesson started.
3. Speaking activity:
3.a  Predictive task
Back to the short film! I asked my students to look at the picture of Pamela (the main character of the video) and predict which type of guy she was looking for. In pairs learners used the TL learnt and then shared their ideas with the other students. I showed them the short film till 02:16, then we had some whole-class feedback.
3.b Drawing dictation
The second 'perfect guy' is the manly type. Students worked in pairs, one could watch the video (till 03:28) while the other one had to draw what their partner was dictating them. We had some feedback and voted for the best drawing, too.
3.c Free conversation
Students felt that the third attempt was the right one and instinctively expressed their opinions about who the perfect guy could be. I was really glad that they were autonomous and for a few minutes I let them speak without interrupting them. However, as a teacher, I need to take into account time management, so I asked them to watch the short film till 04:25.

4. Writing activity: Review
After four attempts Pamela has not found her 'perfect guy' yet. I asked students to put themselves in Pamela's shoes and write a short review about the website and its products.

5. Cooling-down activity: Reflection
I let students watch the short movie till the end and I asked them about the meaning of 'perfect match'. I was really satisfied with the fact that students felt so comfortable that they spoke about their private lives and relationships.

I hope you will spend a great Valentine's Day with your students and loved ones!

--> I'm going to give an online course via Skype. If you want to participate in the free trial class, fill out this form.
Pubblicato da Larissa's Languages a 12:48 1 commento: